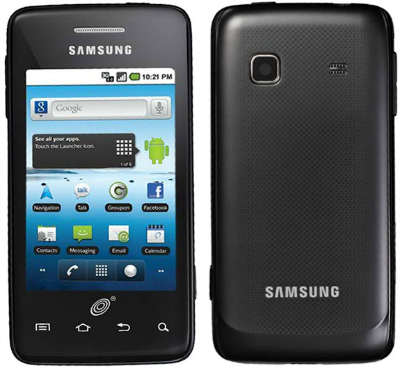 You can the phone right now through the Straight Talk web site.  The Samsung Galaxy Precedent retails for $149 (to pay less than this, see below).

This phone works with the $45 (or less) a month “Unlimited Everything” service.   Keep reading for more information on the phone and some things to think about before you run out and buy.

The official model of this phone is the “Samsung M828C”.  It comes with the Android 2.2 “Froyo” operating system.  It contains a 800MHz processor, 3.2-inch touchscreen display (320 X 480), 2 megapixel camera with video recording capability, 384MB RAM, microSD card slot to allow memory expansion to 32GB, Bluetooth, 3G, micro USB 2.0, 802.11 Wi-Fi capabilities, GPS, and a 3.5mm (regular size) headset jack.  Since this phone is an Android phone, you will have access to many useful applications in the Android Market, including driving navigation through Google Maps.

Originally when this phone launched, I saw that it was a CDMA phone and became very excited.  Having a Verizon-backed, Android Smartphone with roaming for $45 a month would have been an incredible deal.  However, it appears that Straight Talk did not choose to partner with Verizon for this phone, and instead chose to use the Sprint network.

Major metropolitan areas + freeways only
Because Straight Talk chose to use the Sprint network for this phone, the coverage on this phone will likely be similar to the coverage of Virgin Mobile or Boost Mobile who are also Sprint resellers; it will likely only work in major metropolitan areas + on most freeways.  This is a disappointing break in the coverage that Straight Talk normally provides; typically they rely on Verizon+roaming or AT&T+roaming, two carriers that have outstanding coverage areas.

Smartphones can be incredibly useful; they can save you time & save you money.  Having access to the web and to e-mail wherever you are can be a real help.  Prices can be compared, directions and phone numbers can be easily accessed, documents can be retrieved, books can be read, etc.  If you have been “on the fence” about a smart phone, this is your time to act!  With no commitment to a contract, no data overage charges possible, a low phone price and the possibility to sell the phone if it just doesn’t work for you, there’s not a lot of downside to this deal.

If you are currently in a smartphone contract, this deal can undoubtedly save you money over what you are paying today.

The only people I would recommend not buy this phone are people that do not have a smartphone and do not want a smartphone (for whatever reason), or people that need an advanced smartphone (very few people fit into this category – you might think you need that new shiny HTC device or Apple device you see on TV – but let me be the first to tell you – if you are an average user you won’t really use all those features!).

If you do decide this deal is for you, don’t delay – these phones will be hard to get, demand will be very high.  Go to the Straight Talk website to order today!

Get a Free Shipping from Straight Talk

Get Free Shipping with the Purchase of a Straight Talk Phone when you sign up using this link!

If you purchase the Samsung Galaxy Precedent through Mr. Rebates, you can save 10% off your order.  Here’s how it works:

If you have any questions on this phone or want to discuss this deal, leave a comment below!